The transfusion medicine field is complex - there is confusing terminology, intricate genetics, and over 100 years of scientific research underpinning it.

Education is a core part of the consortiums mission so we have included below a few snippets of basic information about blood groups and genotyping to help you understand our work. 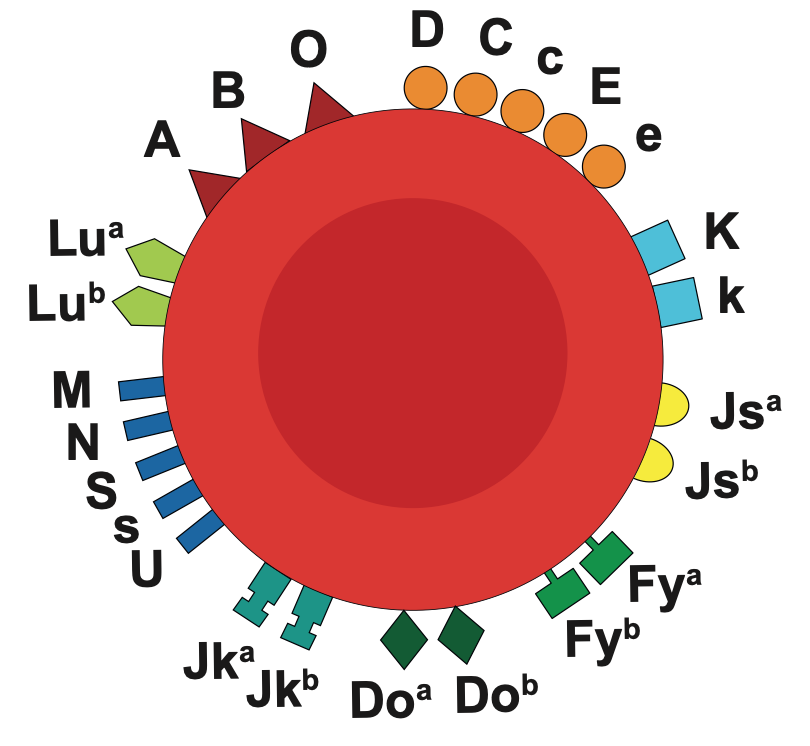 A cartoon red blood cell with various antigens on its surface.

Antigens must be defined by antibodies which occur either ‘naturally’, due to encountering antigens ubiquitous in the environment, or are formed as a result of the immune system producing antibodies against "non-self" blood group antigens following exposure to blood from another individual, for example during a transfusion.

The most important fact to remember is that it is the presence and absence due to inherited variation of these red cell surface antigens that defines your blood group.

Almost everybody knows of at least two blood groups: ABO and Rh (which is often mistakenly called Rhesus).

"A" and "B" are the main antigens in the ABO system and define your ABO blood group. People with group AB have both the A and B antigen, and group O people have neither.

The positive (+) or negative (-) types which accompany most peoples ABO group information actually refers to the D antigen of the Rh system. 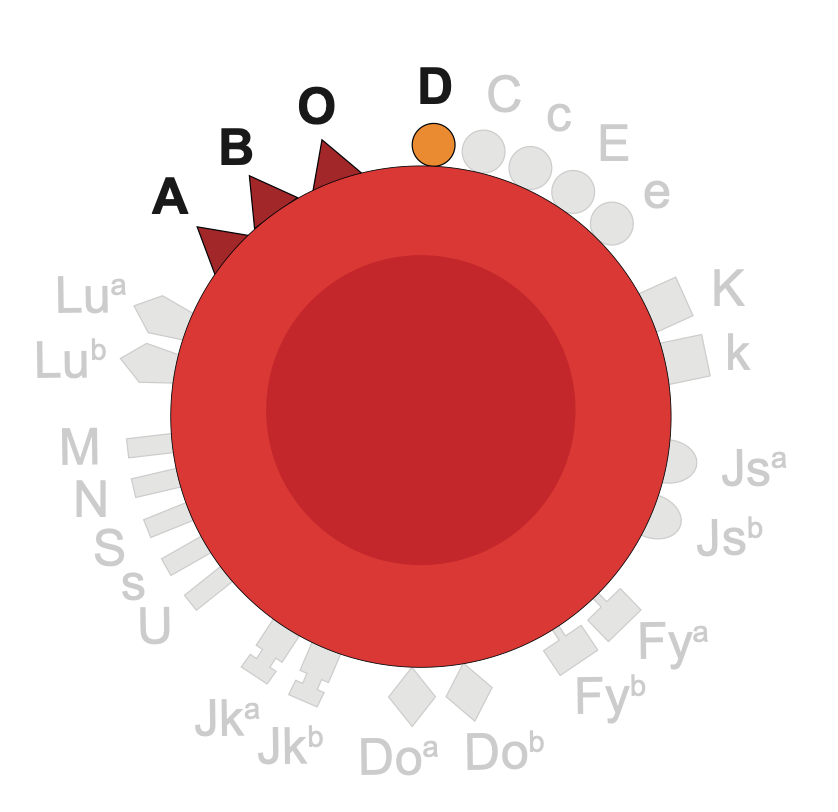 The ABO and Rh antigens highlighted on a red blood cell.

To recap there are 43 blood group systems, containing 343 unique antigens – you may ask the question how is the possible? The secrets lie in our DNA, which is passed on to us from our mothers or fathers.

Blood group antigens are encoded by ‘packages of DNA information’ we have inherited - these packages are called genes. For example, if the ABO gene you inherited from your mother encoded group A and the one from your father group B. The result would be that your ABO group is AB. The differences at DNA code level between the A and B variants of the gene are very small, generally, only 7 DNA code changes are required to switch from A to B.

Through decades of pain staking research, a lot of which was performed by members of the consortium, we now understand the relationship between the DNA code and the 343 unique blood group antigens currently known.

Using this knowledge, the members of the consortium have developed and affordable DNA based test which can be used to define nearly all known blood groups antigens. In addition to Red Blood Cell antigen typing it can also type other important types of antigens, such as those on Platelets or Leukocytes, and even provide information relating to blood donors health.

A genotyping array is a small SNP-CHIP device, the size of a thumbnail to test a sample of DNA from a single individual for positions of variation, at up to a million different positions in our DNA code.

Our DNA code is made up of building blocks, called nucleotides which come in four different flavours of A, C, T and G. A stands for adenine, C for cytosine, G for guanine and T for thymine. In the double helix A and T, and C and G function as the ‘rungs of the ladder’. Our genome is made up of two sets of 3.2 billion (3,200,000) building blocks or nucleotides. The order or so called sequence of the building block differ between individuals, with the only exception being the DNA sequence of monozygous twins, which is identical.

If we decipher all the 3.2 billion building blocks of our genome than we observe 4-5 million positions where the type of building block differs from the reference genome. On average for each set of 600-800 building blocks, a different nucleotide may be observed at one particular position than the one present in the reference genome. We name these positions where different nucleotides may be observed between individuals, a single nucleotide polymorphism or SNP. Most of the blood group antigens are caused by a single SNP in one of the 37 genes underlying the blood group systems.

We at the BGC have developed and validated the first-ever SNP-CHIP or genotyping array to test the DNA samples from donors and patients for all the different blood group antigens, the groups on platelets (named HPA groups) and on white blood cells (named HLA). The Consortium members will test this new SNP-CHIP with DNA samples from thousands of blood donors and patients with the main aim to obtain regulatory approval for the use of the SNP-CHIP test by blood services world-wide.